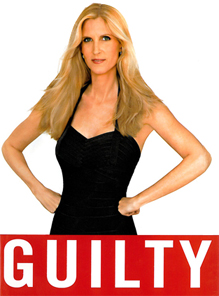 Waiting for Coulter's Correction: days without an apology since her 1/16/08 column endorsing Romney.
(Check back the first of each month!)

Tragically, yes. In Romney, she has.

If Ann Coulter publicly apologizes for mischaracterizing and defending Massachusetts Governor Mitt Romney when he voluntarily instituted homosexual marriage and when he authorized tax-funded elective abortions, we will post that apology here:

Read for yourself the Massachusetts laws and court cases we link to below to document Romney's extremist liberal actions. Conservatives complain about 'activist courts' that make laws, but Mitt Romney and Ann Coulter force courts to be activist. They actually take restrained, though immoral, court opinions that did not order Romney to implement homosexual marriage or fund elective abortions, and they pretend that such rulings ordered these evil actions. They make restrained liberal courts into liberal activist courts.

As Jesus said, "You will know them by their fruits," not by their words. AFTER Romney's alleged pro-life conversion, he used the 25-year old Mary Moe court opinion about so-called 'medically necessary' abortions as an excuse to fund elective surgical abortions, increasing the percentage of abortions that Medicaid would pay for from 1% (those medically 'necessary') to 100% (all). We know him by his fruit. Romney aggressively promotes and funds child killing.

And Romney used the 2003 Goodridge court opinion that "So ordered� the Legislature [to] take action as it may deem appropriate..." as his excuse for ordering state bureaucrats to 'legalize' homosexual marriage, even though the ruling never even mentioned the governor. He is an activist governor, taking immoral but restrained court orders and expanding them to show homosexuals and child-killers that they can trust and vote for him. Romney lies, and Coulter swears to it.

THE PLANK - Why we expose false leaders:
Why are we exposing 'conservative' leaders when there are so many evil liberals destroying our nation? Jesus said, "remove the plank from your own eye, and then you will see clearly to remove the speck from your brother's eye." It's foolish to even attempt to change the country through 'conservative' politicians if we allow Christian leaders to lie and cover up the liberal and cruel anti-marriage pro-abortion agenda of favored Republican candidates.

AnnCoulterApology.com is waiting, Ann, for you to do the right thing. The truth is the truth, no matter what you report. But if you and our alleged pro-life, pro-family leaders will defend those who commit such atrocities as funding child killing and implementing homosexual marriage, then what will you not lie about? Republican destroyers of marriage and child killers are not preferred over Democrat degenerates and pro-aborts.